The stick figure in a wheelchair has become one of the most widely-used and instantly recognised disability access symbols in the world – but is it time for a new one? The debate begins…. 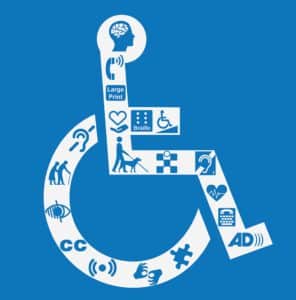 Why go to the expense and bother of changing something that has been working perfectly well on almost every public toilet and building in the developed world since 1969? After all, if it ‘aint broke, don’t fix it. A lot has changed since 1969 and not least of all, the lives of people with disabilities, all kinds of disabilities. If we want to push for a healthier respect for disability, the symbol could be a chance to get people thinking. It is an opportunity, perhaps, to allow people to absorb a more positive concept of disability without being force-fed or consciously aware of doing so.

One of the difficulties is that it may require pinball wizardry to create an inclusive signage for disability that embraces all types of disability, not just wheelchair-users. Apart from people with visual impairment and mental health difficulties, there are people on their feet who may use a stick or crutches. Then there are a range of people with invisible disability, who frequently feel intimidated using facilities for disabled people.

What exactly is accessibility? In the UK, there is an estimated 750,000 wheelchair users but that is less than 10% of the disability community. Yet if a new symbol were to address access for blind people and other non-wheelchair related impairments, would these people need to use a larger toilet space, which disability signage that included all disabilities would be symbolising? Some may think this demeaning. And there is another issue here because if no other impairments are included in the sign, there is an underlying message that it’s all right for wheelchair users who can be given official recognition but everyone else can just struggle along. How helpful is that? Many people with hidden disabilities report that when they park in an accessible parking space, others may look, stare and sometimes start confrontation.

And how do you depict impairments like autism, epilepsy and mental health visually?

We are all accessible, but some are more accessible than others.

George Orwell had a point. Some things are completely accessible to some, and to others only slightly accessible. Do we need to be more realistic and accept that there are limits to what can be achieved with graphic symbols, particularly access symbols for visually-impaired people and those with invisible disability, in one single icon? It is refreshing to see that Tottenham Hotspur have become the first football club to feature the words, ‘not all disabilities are visible’ on their toilets for disabled people. This is certainly a kick in the right direction.

Some supermarkets and other places have introduced a picture of one person holding the hand of another. This indicates that assistance is available for people who need guidance, perhaps with sight or cognitive difficulties. Again, a great start.

Change begins with conversation and that alone can generate a positive change in actions and attitudes towards others, which is to be welcomed. Any move to try and recognise people with invisible disabilities and long-term health conditions that aren’t physically obvious is a good one.

If we keep the present symbol of stick man sitting bolt upright in a wheelchair frame, there is another element here. The legs and arms look a bit like mechanical parts, with an unnaturally stiff, upright posture. Isn’t this a bit demeaning too? It rather looks as if it’s the chair that’s important, not the person, a bit like something from Ironsides.

So, with all this in mind we have created a few variations of what a new symbol could look like. Let’s start the debate…

Visual Consultancy works with organisations to create a more inclusive environment and customer/employee experience for people with disabilities. For more information on disability awareness training visit: